Much Of What is Known About Infrastructure is Wrong 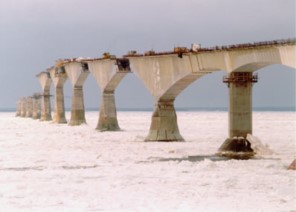 Moving people, goods, and information more quickly at lower cost has been a common public purpose since George Washington left his Potomac Canal development in 1789 to become President of the United States.  Our infrastructure platform allows information to flow, goods to move, and people to work.  No nation has been better at moving people, goods, and information on networks.  From 1820 to 1992, the GDP of Western Offshoot nations (which the USA dominates) grew by a factor of 464, while that of Western Europe grew by a factor of 40.[1]

Yet, many public perceptions about infrastructure are wrong.  Those mistaken perceptions have consequences.  Here are some corrections.

The infrastructure we build follows what the private sector learns how to build.  To George Washington, canals were “high tech.”  Then, James Watt invented the steam engine, and Robert Fulton introduced the steamship.  John McAdam invented “macadam” paving.  Carnegie’s steel helped Eads put railroads over the Mississippi.  The public lost interest in canals.  Then, came the auto and the plane.  The public lost interest in railroads.  The full impact of the computer, the internet, wireless, and Bluetooth are ahead of us.  American infrastructure has been re-built again and again, in a parade of new technologies, materials, and methods that change what we choose to build.  One generation can only guess what the next will build.

Our infrastructure is produced by the private sector – not government.  Of the millions of (non-military) bridges, water and wastewater plants, sections of road, runway, rail, transit, and pipe in American history – few were designed and built by public employees.  Professional design for infrastructure is obtained by contract with private engineering firms, except in a few states that retain in-house capacity.  The same is true for initial construction, major renovation, and capital repairs.  Construction comes by contract with private constructors.  Except in rare situations, public employees don’t design or construct America’s infrastructure networks.  In this sense –all of American infrastructure is private.

Access is the primary reason infrastructure is public.  Infrastructure is public because the population has a right to access it – upon conditions set by the governments who regulate it.  The connection between public access and the right to regulate is deeply embedded in American law.  Since Thomas Jefferson attacked British monopolies in the Declaration of Independence, American governments have been wary of monopoly.  Governments routinely insist on competition in the delivery of public infrastructure.  Where competition is impractical, governments set the terms on which the public has access.  Communication networks – the telegraph, telephone, radio, TV, cable, the internet, and wireless– have been deployed and maintained in this way – by the private sector.  Users bear the entire cost by purchasing devices, paying fees and special federal taxes.  Government is there, making money by selling bandwidth and issuing licenses.  These networks are privately funded public infrastructure.  Access to roads, rail, bridges, airplanes, water, and wastewater is also regulated, through a complex system of licenses, vehicle restrictions, tolls, fees, and taxes.  Similar systems protect public access to natural gas, water, and wastewater.

Government operation is a second reason infrastructure is public- but this is failing.  State and local governments own, operate, and maintain more than 97% of the nation’s roads, bridges, airports, transit, water, and wastewater facilities.  Yet, with ownership comes responsibility for proper stewardship of public assets.  Funding for maintenance and repair is falling, as mounting education, healthcare, and retirement costs compete for scarce public dollars.  Infrastructure has not won this competition since the 1960’s.  There is no sign that this will change – or that the federal government will (or could) fill the deficiency.  Public operation has produced unacceptable levels of service and unaffordable costs.  This is not a knock on public employees.  Skilled payroll staff perform maintenance and repair activities with what funds are available – but trends in levels of service and cost are all negative.

Deferred maintenance cuts current spending but raises overall infrastructure costs.  Our research at MIT consistently showed that 30-40% of the life cycle costs of core infrastructure assets are “avoidable” through life cycle procurement methods that include timely maintenance and repair.  For more than a decade, the American Society of Civil Engineers’ Report Cards has awarded D’s, a few C’s, and the rare B as grades for infrastructure.  Large deferred maintenance backlogs are routine, imposing substantial extra future cost.  For example, the Army Corps of Engineers confirms that deferring a $1 pavement repair from year 7 to year 9 raises the cost of repair to more than $4.[2]  Some states are beginning to change procurement strategy to eliminate deferred maintenance and capture avoidable costs.  Virginia contracts for maintenance and repair of its Interstate highways.  More governments will follow.

Much of the Western world – except the United States – has opened competitive procurement across the life cycle.  Public entities should be free to competitively contract for infrastructure services with firms who have the professional and financial qualifications necessary to produce specified results, over longer periods of time, under difficult circumstances.  Governor Cuomo’s leadership in reconstructing LaGuardia Airport is a recent example.  The Port Authority (PANYNJ) determined what levels of service, maintenance, professional experience, equity, and financial commitments would be required before awarding concession contracts at LaGuardia.  The Authority obtained enforceable long-term commitments on level of service and maintenance, from a concession contractor focused on producing the desired result:  an integrated solution within schedule and budget constraints for the design, construction, operation, and maintenance of the new terminal, while existing operations continue.

Making lists in Washington, D.C. of new projects that will (or won’t) be federally subsidized IS the problem – not a solution.  It is hard for any government to integrate technology, design, construction, operations, and maintenance over long periods in an increasingly digital world.  To refresh major pieces of American infrastructure and serve taxpayers, governments need to focus on what they can do well:  produce clear requirements, allocate integration and production risks to the private sector, and use sound, competitive procurement practices to secure enforceable commitments that deliver value for money.

Miller is a former professor of civil engineering at MIT and chair of the ABA Section of Public Contract Law, and an expert on infrastructure procurement.  He was a reporter on the ABA’s 2007 Model Code for Public Infrastructure Procurement project, providing best practices in procurement to state and local governments.  You can find him on LinkedIn and Twitter @JohnBrownMiller.