Infrastructure Upside Down – The Gateway Project

[Originally published by The Washington Examiner on April 8, 2018.]

The federal role in financing state infrastructure remains upside down.  Instead of using life cycle competition to confirm value for money, Congress remains focused on earmarking state projects in federal appropriation bills.  The latest example is the $30 Billion Gateway Project between Penn Station Newark and Penn Station New York.  Competing elected officials talk past – rather than to – each other.  Ten million yearly passengers through Penn Station deserve better.

Gateway is a substantial rebuild of the original “northeast corridor.”  Completed in 1910, the original corridor is one of the nation’s most successful “public-private-partnerships.”  The importance of a direct rail link from Newark to Penn Station was first recognized by Charles M. Jacobs, Chief Engineer of the Pennsylvania Railroad.  In one of the smartest decisions in American infrastructure history, the Pennsylvania acquired the Long Island Railroad and created the northeast corridor with three jaw-dropping projects.  The first was a direct rail connection from Harrison across the Meadowlands, across the Hackensack River (by the Portal Bridge), through twin tunnels under Bergen Hill, the Hudson (by the North River tubes), and Manhattan to 34th Street Penn Station.

The second was the package of four single-track East River Tunnels from Sunnyside Yards Queens to Penn Station.  The third was the magnificent eight-acre Pennsylvania Station, inspired by the Gare d’Orsay in Paris.  At peak usage in 1945, it served 100 million passengers per year.

Everything about the Pennsylvania program was high tech.  “Smokeless” electric locomotives had just been used in Paris.  This was critical, since neither New York nor the federal government would permit steam locomotives in tunnels to Manhattan.  New design and construction methods were needed to drive twin 23-foot diameter tunnels through Bergen Hill and under the Hudson and East Rivers.  The project put Manhattan at the center of a direct rail route from Washington to Boston.

On the cost side, the Railroad took a substantial delivery risk.  On the revenue side, existing demand was strong and proven.  Ferry revenues for moving people and goods across the Hudson and East Rivers were known and could be captured.  The new corridor would displace seven railroads running to the western shore of the Hudson River, a boost in future revenue.  The connection to Queens, under the East River, solidified the Long Island Railroad acquisition.

The entire program cost $114 million, including the Portal Bridge, the six tunnels, and Penn Station.  Permits were obtained from state and federal authorities.  All of it was privately funded by the Pennsylvania Railroad, which took revenue and cost risk.  No federal grants. 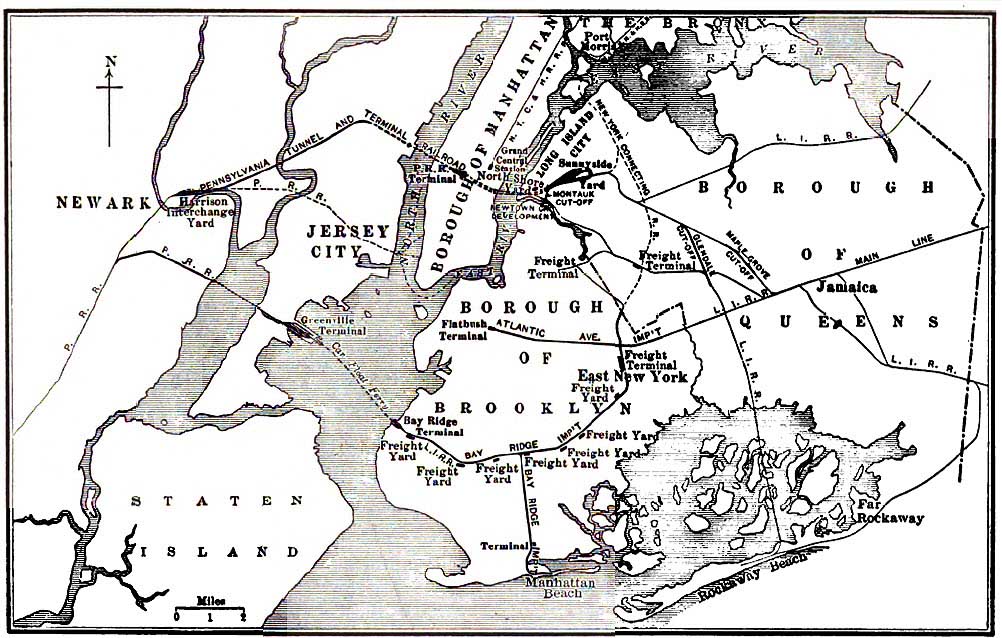 The financial model worked for nearly fifty years, longer than the useful life of facilities on the line.  The $40 billion Interstate Highway grants program changed that.  In the late 1950’s, a tenfold decrease in train ridership dramatically reduced rail revenues.  Costs to maintain and repair obsolescent facilities went up.  To raise capital, the Railroad sold air rights above the underground station.  By 1966, Penn Plaza and Madison Square Garden replaced the 8-acre surface station.  The Railroad received a new, but smaller underground station, with a minority interest in Madison Square Garden.

Between 1968 and 1970, it all fell apart.  The Pennsylvania Railroad merged with the New York Central, but Penn Central went bankrupt in 1970.  Amtrak took over the corridor built by the Pennsylvania Railroad.  For nearly fifty years, Amtrak has tried to keep the 1910 structures in operation.  Maintenance and repair items have been deferred.  Key components of the corridor – particularly the Portal Bridge and the Hudson tunnels are simply obsolete.  As Amtrak, Long Island Railroad, and New Jersey Transit passengers know, level of service is dramatically down.

Everyone – including the President and the Secretary of Transportation – believes this section of the northeast corridor requires replacement and expansion.

What is to be done?  First, the failed policy of the last fifty years should be abandoned.  The northeast corridor should not be allowed to rot and die while the political ups and downs of Amtrak are debated in the appropriation circus in Washington, D.C.

It is time to use life-cycle competition to replace the corridor and to verify the amount and duration of any long-term government subsidy.  Expanding to four tracks, new Portal and Sawtooth Bridges, and a new Hudson River tunnel should be the core of a thirty-five year concession to design, build, operate, and maintain controls, signals, and tracks between Newark Penn Station and New York Penn Station.  Amtrak would run trains on top of the concession.

The revenue picture is known.  In 2017, Penn Station rail revenue was $1.04 billion.  Revenue from Madison Square Garden was $1.4 billion.  That’s $84 billion over the next thirty-five years, which would increase with higher service levels.  The cost picture is known to Amtrak.  Amtrak should commit its current level of operating expense, plus a reasonable contribution from passengers, as a fixed availability payment over the concession period.  Canada’s Confederation Bridge project and JFK’s International Arrivals Building are solid working models for this approach.  Amtrak’s Request for Proposals should stipulate that if bidders cannot commit to life cycle cost savings of at least fifteen percent below projections, Amtrak will not accept.

Eighty-eight percent of Penn Station users are commuters from New Jersey and Long Island; the rest are Amtrak users.  New York and New Jersey have offered to fund fifty percent of the project.  Instead of asking Congress for an open-ended Gateway appropriation – without competition and with no commitments, work the construction industry to confirm the most cost-effective way to raise service levels.  The $30 billion price tag will come down, converted to a binding commitment.

Open the project up to competition.  Hold proposers to their commitments.  If competition confirms there is a shortfall, ask Congress to close the gap.  The entire country will support it.

Be the Big Apple.  Stop talking about it.  Get it done.