Our Infrastructure is doomed from the start

[Originally published THE HILL on November 20, 2017, without charts.]  This is the first part in a three part series on infrastructure.

The “design-bid-build” project model is one of several proven methods for delivering infrastructure. It’s been the model of choice since 1916, when Congress began funding the U.S. highway network with this method.

A design professional is first selected based on qualifications, not price. After “design” is complete, that design is put out to open competitive “bid.” The lowest priced bidder then “build(s).”

In 1956, this method was used to deliver the $40 billion Eisenhower Interstate Highway network. In the 1970’s, EPA used it to distribute $70 billion to 3,000 local governments for wastewater treatment plants. Design-bid-build is policy dogma — a century after its first use.

Design-bid-build addressed two practical issues. The first was how to ensure high quality engineering design. Less than 10 percent of initial delivery costs are spent on design, but poor design puts the public at risk and can lead to substantial construction delays and cost overruns. Selecting the designer on the basis of qualifications is one way to ensure good design.

The theory is simple: A dime well spent on high quality design improves the likelihood of spending the next taxpayer dollar wisely on construction.

The second issue was how to not to overspend that next dollar on construction. Open competition, only on price, is how this project model seeks the lowest construction cost.

While cash flow varies by project, the shape of a typical cash flow curve on a design-bid-build project is stable. Figure 1.  For each $10 expense on design, there is (at least) a $100 expense on construction, over an initial delivery period of eight years. This cash flow reveals the project model’s primary weakness. Infrastructure assets have useful service lives of more than 35 years. This project model ignores the operations, maintenance, and repair period. These activities must be affordable and must be performed by the governments holding the asset. 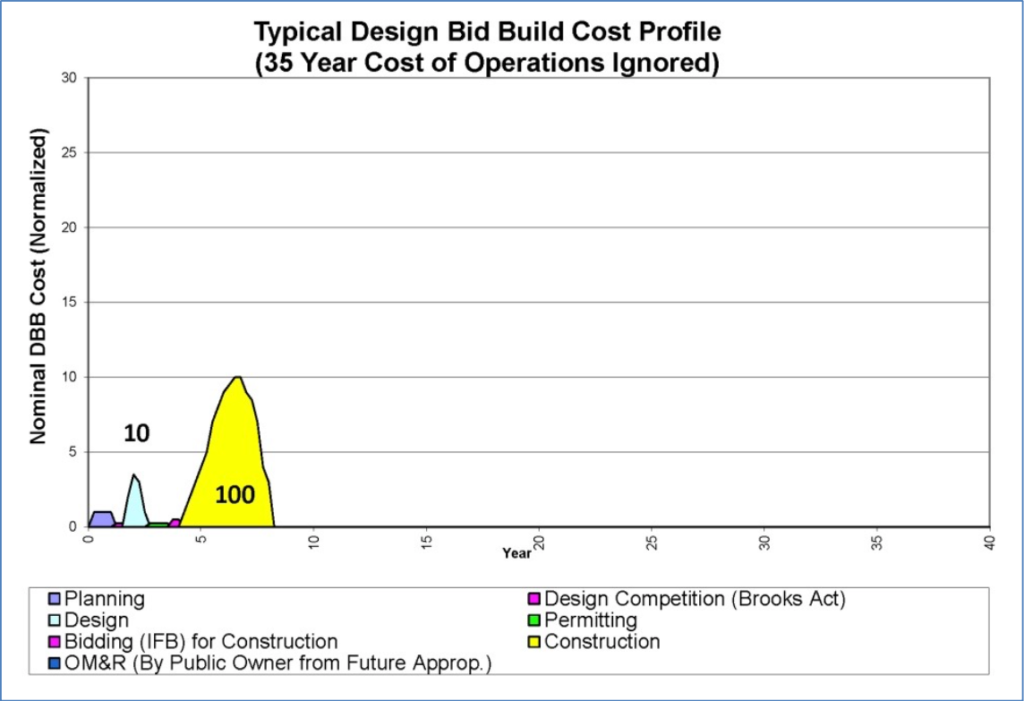 A typical cash flow for this project model, including ongoing costs, spans 40 years. Ongoing costs are more than 10 times that of initial design and construction. More than $1000 is spent during a typical facility’s useful life for every $10 spent on design and $100 spent on construction. These costs include utilities, regular maintenance (with no deferral), and a substantial capital repair/refit mid-way through its life. Facilities that are properly operated, maintained and repaired, are always in good condition. While cash flow varies by project, the shape of the curve is stable.  Figure 2. 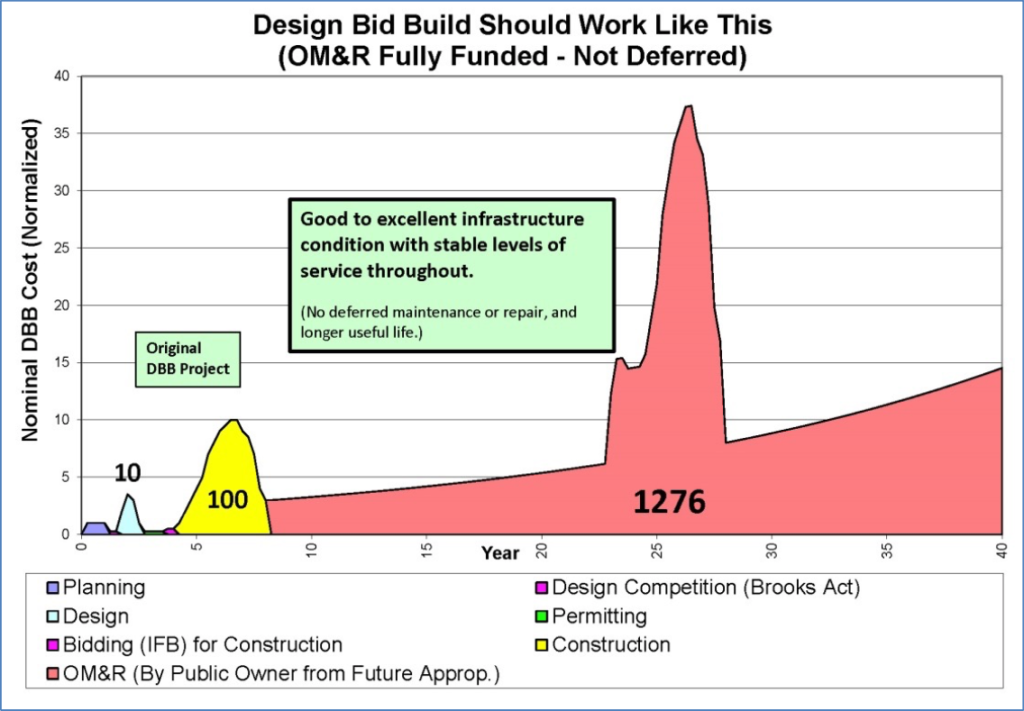 Our research at MIT confirmed that life cycle costs of operation are 10 to 20 times that of initial construction. For long-life facilities like the Brooklyn and Golden Gate Bridges, ongoing maintenance costs 20 times more than construction.

The critical assumption of the design-bid-build model – timely performance of ongoing operation, maintenance, and repair – is no longer valid. Competing claims for scarce public funds have emerged. The massive tail of ongoing costs is not affordable. Funding for these ongoing costs has fallen. Without it, this project model can’t work. Report cards by the American Society of Civil Engineers confirm this failure.

A century of experience confirms it is time to question the effect of federal grants on state and local infrastructure. In exchange for a federal highway grant reimbursing 90 percent of the $110 cost of initial design and construction ($99), the state pays 10 percent ($11) at the time the road is built, plus maintenance and repair costs of more than $1100 over the next 35 years.

The future cost is 100 times the state’s $11 initial expense. An iceberg hides 90 percent of its weight underwater. This challenge is 10 times worse – 99 percent of future life cycle costs are hidden – for other officials and taxpayers to handle.

This is the source of our current difficulties.

Figure 3 illustrates where many public owners have moved – away from this iceberg. The future expense is unaffordable. Regular maintenance and capital repairs are deferred. Facilities decay from neglect, driving replacement costs up. Users endure prolonged periods of poor condition and poor levels of service. Just before failure, with the facility in crisis, “replacement” through a design-bid-build project is the political solution. This explains the unending call for more federal grants for new design-bid-build projects – the only tool in the toolbox. 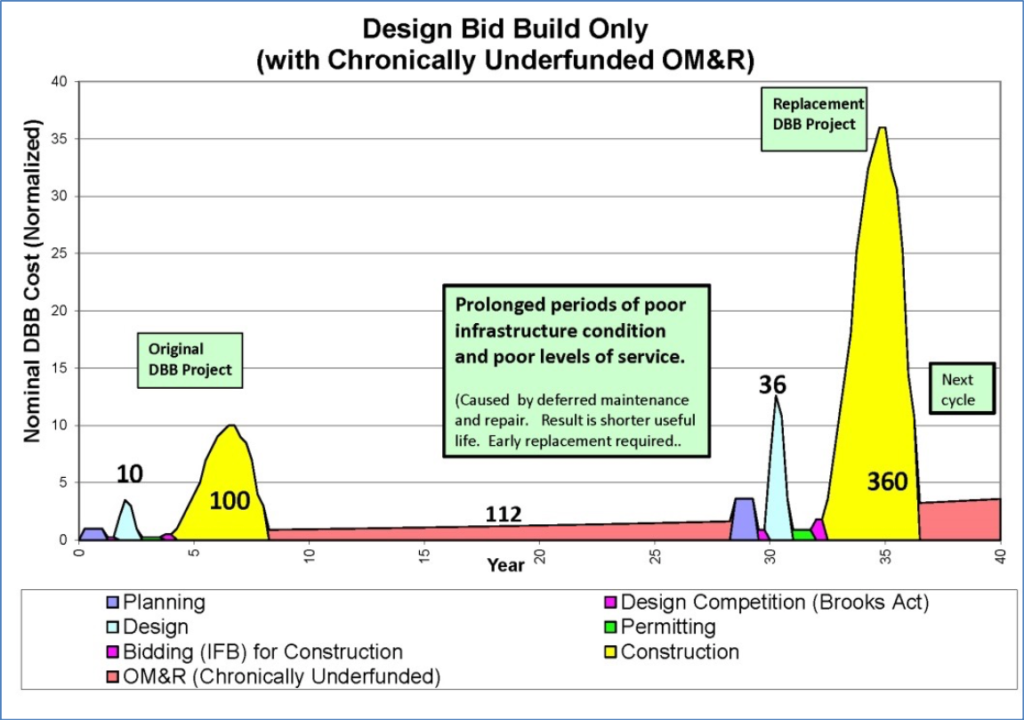 The consequences are plain: chronically poor levels of service, higher travel times, and higher transportation costs, over failing infrastructure networks. Users are justifiably upset. Core infrastructure networks are plainly in disrepair – with no fix in sight. The skills of the building trades are sidelined, as bridges rot and pipes leak. A century of dogma keeps all of us from higher levels of service at lower life cycle costs. And, poor infrastructure performance makes every American less competitive in world markets.

Simple, proven solutions exist.  Procurement systems in Britain, Canada and Australia have been opened to include all proven delivery methods, as they did in the United States before 1916.  The 2007 ABA Model Code for Public Infrastructure Procurement is an example of a practical state legislative model to re-open procurement across the life cycle.[1]

It is time to use proven competitive methods to manage life cycle costs. Opening competitive procurement will produce far better results – in savings and new investment – than any proposal in Congress to spend more money on design-bid-build projects.