We can lower infrastructure price tag . . .

[Originally published by THE HILL on November 22 2017, without charts.]  This is the third in a three part series on infrastructure.

As American infrastructure continues to decline, the endless debate whether “public” or “private” infrastructure is “cheaper” is much more amusing than substantive. The four typical cash flows below illustrate how (and why) the participants in this debate keep talking past each other.  Our MIT research explored how project delivery and finance methods affect levels of service and life cycle cash flow. [1]  The shape of these curves is stable.  Normalized, nominal costs are shown. 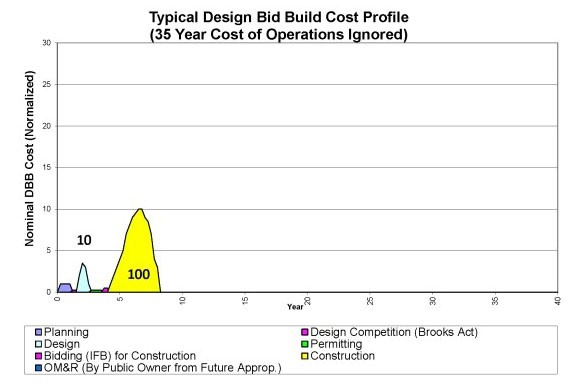 For every $110 government spends on design and construction, it spends more than $1,100 on operation, maintenance and repair as shown in Figure 2.  On a life cycle basis, a commitment of $10 to fund the design of an infrastructure facility typically leads to further commitments of more than $100 to construct it and more than $1,100 to operate, maintain and repair it over its useful life, including a refit/repair mid-way through that life.  The asset in Figure 2 is kept in good condition, with no deferred maintenance or repair. 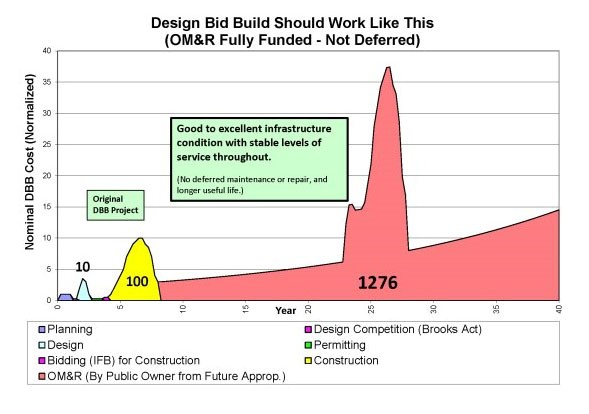 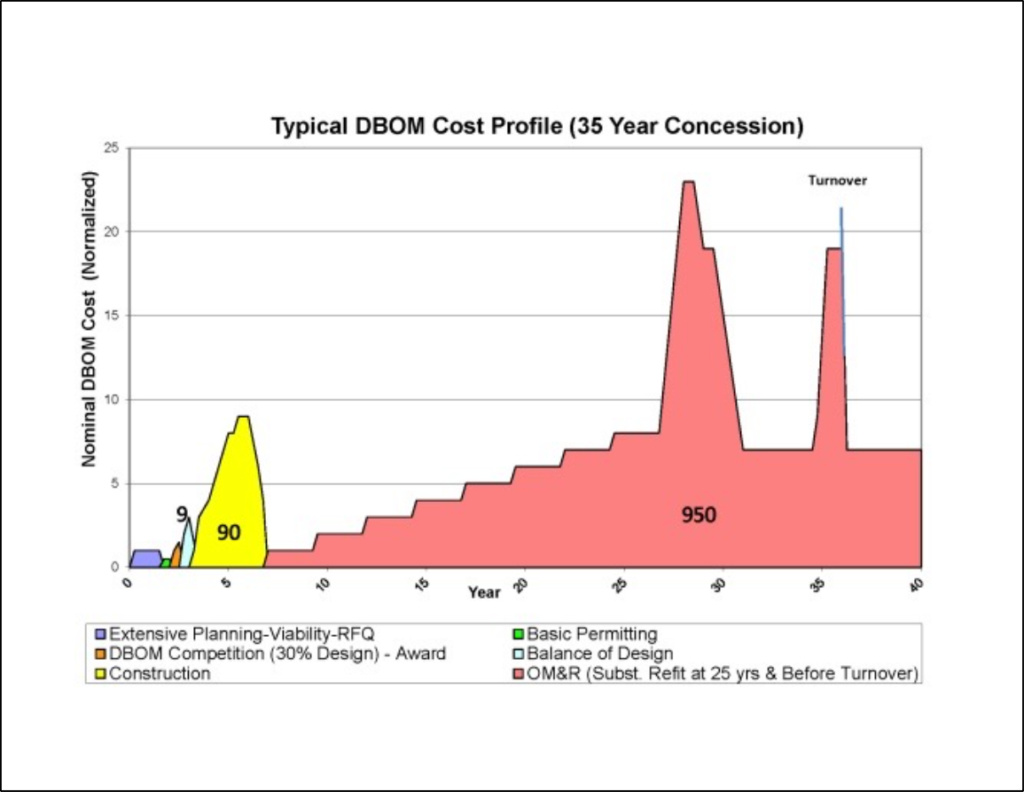 Figure 4 adds a 3% financing premium across the concession.  This illustrates the effect of private financing of infrastructure, at a rate 3% higher than the government rate. 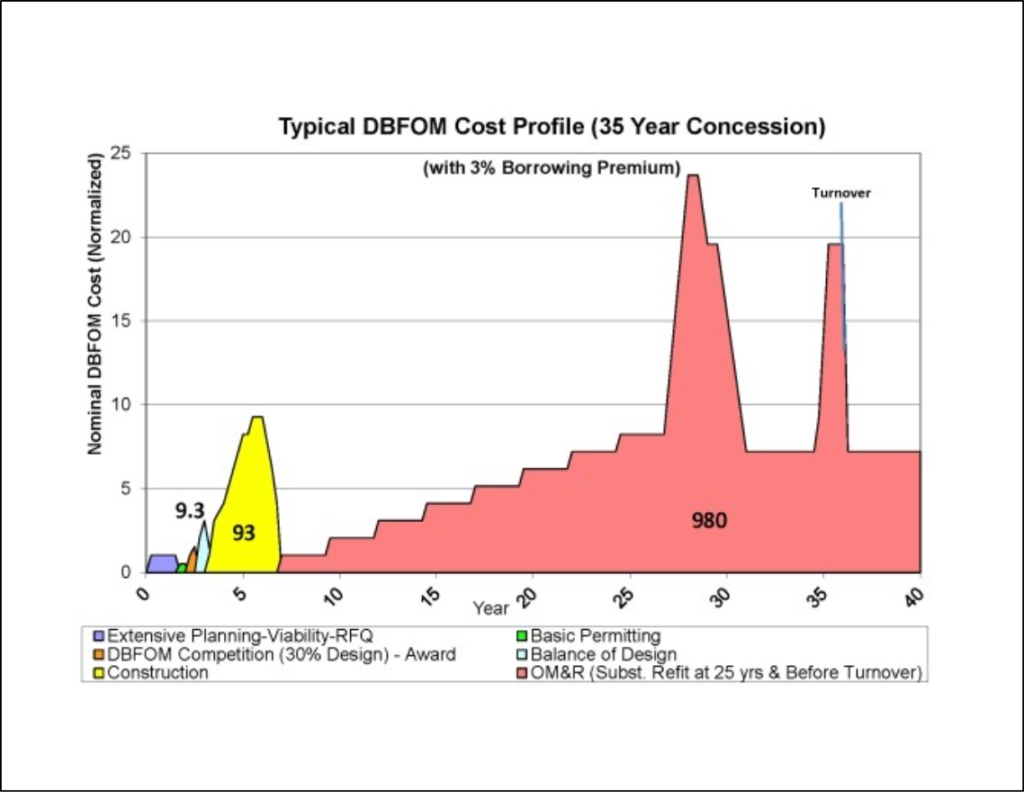 When contracting on a concession basis, public owners typically include a substantial refit of the asset and a contractually required maintenance and repair effort just before turnover to the government. Concession contracts make payment contingent on full performance of government requirements as to levels of service and asset condition.

There are substantial differences in cash flows for a concession contract that combines design, construction and long-term costs into a single contract obligation. The cost of design and construction is typically reduced by about 10 percent when these activities are integrated in a single effort — known as “design build.”  Instead of spending $110, typical concession costs are $99 for design and construction, a 10 percent reduction. Our research also showed that the cost of maintenance and repair is substantially reduced when design-build is further integrated across the life cycle.  Savings of 25 percent on operation, maintenance and repair costs are typical.

Taxpayers foot the bill, no matter how government delivers infrastructure.

Under the design-bid-build project structure we have relied on for more than a century, head to head competition gets the lowest construction price. But, this is just the “lowest (construction) price,” and it is obtained for the one specific design produced by the design team. This distinction is important. There may be other designs that would have produced a lower construction cost. These remain unknown and un-priced. There is no competition in design-bid-build to produce the design with the “lowest price.”

And, the design-bid-build process doesn’t require the designer or contractor to make binding commitments about operation, maintenance and repair costs in a “public” competition.  Minimizing these costs are not among their contractual responsibilities.

The benefits of injecting competition over the life cycle into infrastructure projects are clear. When teams compete over the life cycle of a project, competitors are planning far forward, not only to the construction phase, but to the long operation, maintenance and repair phase. Winning designs are scrubbed for cost to build, repair and maintain. Designs are configured for ease of construction, repair and maintenance. Commitments are in place to perform those services as budgeted. The entire life cycle is wrapped up in a competitive package, under the pressure of competition.

Two centuries of experience in the United States confirm there are multiple ways to deliver and finance infrastructure, and to do it well. We already know how to compete to include operation, maintenance and repair costs in competitions for infrastructure.  A good U.S. example is Seattle’s Tolt River Water Treatment Project.  The city first built its best estimate of life cycle cash flow, assuming “public” delivery. The city then announced that it would accept “concession” delivery proposals — but only if they produced a life cycle cost savings of at least 15 percent. The winning proposals reduced the city’s life cycle cost by nearly 40 percent. Competition works.

The argument whether “public” or “private” delivery is “best” is irrelevant. Best value is the goal: the most advantageous life cycle combination of level of service and price. Competitive models allow governments to get a definitive answer for each and every significant infrastructure project.

Use competition. Prove it — to taxpayers.